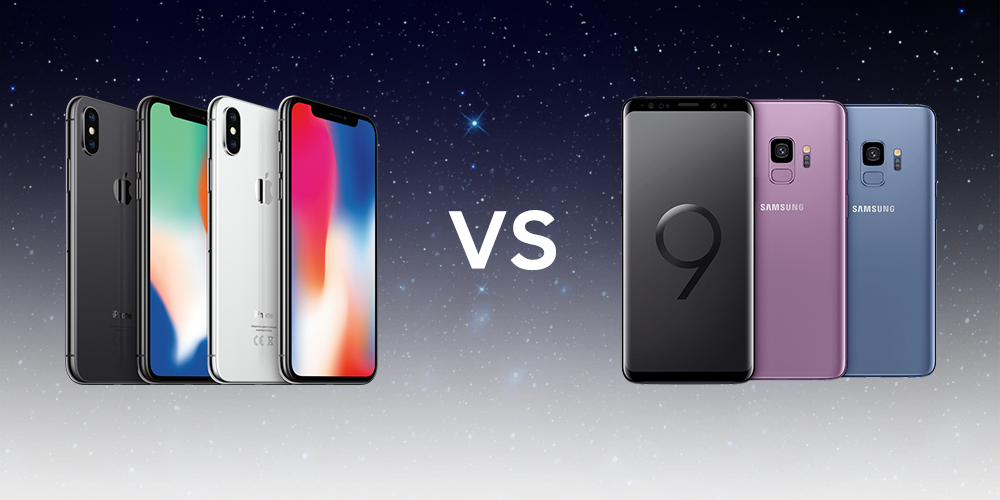 Samsung has finally announced the highly anticipated Galaxy S9, Samsung’s answer to the iPhone X. The question on everyone’s mind is which one will be crowned king of the high-end smartphone?

Let’s start off with price. The Apple iPhone X famously breached the £1,000 mark – a huge increase over previous iPhone models. Many people thought that this price would deter customers, but in reality, the iPhone faithful dug deep into their pockets and still bought it in huge numbers.

The new Samsung is priced lower than the flagship iPhone at around 25% cheaper than the iPhone. Surely that is likely to encourage some Apple customers away?

In terms of the display, there really isn’t too much between the iPhone X and the Galaxy S9. Both are equipped with stunning 5.8” super AMOLED touchscreens. The only noticeable difference between the two is that the iPhone has to put up with a screen resolution of 1125×2436 pixels.  The S9 however, can boast 1440×2960 pixels, meaning the S9 will be able to show sharper, clearer pictures.

What about security? Well, iPhones of the past were equipped with fingerprint sensors that allowed the user to unlock their device. For the iPhone X, this option was completely removed in favour of ‘Face ID’ – Apple’s version of facial recognition. This left a lot of people wondering how secure this feature would actually be, surely someone could just hold a picture of your face up, right? Well, no. Apple seem to have worked wonders with Face ID, and in fact they are confident in saying that the chance of someone breaking into your phone is 1 in 1,000,000. That’s quite an improvement compared to touch ID (Apple’s fingerprint scanner) which was 1 in 50,000.

The S9 has gone a comparable way to the iPhone X in terms of security, however Samsung have opted not to get rid of the fingerprint scanner on the back of the device. They have however incorporated their own facial recognition scanner – although it is being reported that this is not as secure as Apple’s version – and perhaps Samsung agree with that, as they do not allow you to use their facial recognition software for Samsung Pay.

So, which phone is better? It’s a tough question to answer. On paper, the Samsung has the specifications to be a real winner – especially when you consider the price difference between the two. Ultimately however, I feel that these phones are incredibly similar, it just comes down to which software you prefer, iOS or Android (and also how much cash you are willing to part with!)